Paper Wasps Can Stick Around During Winter

by worldfumigation
on
36 Views
No Comments

Have you ever spotted a wasp flying around your home in the dead of winter and wondered, “Where in the world did that come from?” If so, you’re not alone – especially if you live in one of the mid-Atlantic or Midwestern states. More likely than not, the type of pest you saw was a paper wasp, which gets its name from the paper-like material it uses to construct its nests.

In early fall, worker paper wasps begin to die off, which is what most people assume happens to wasps in the winter. However, certain females – those who are destined to become the future queens of a new colony – seek a protected place to overwinter. In advance of the first hard frost, their internal clock tells them it’s time to investigate various harborage sites, which might be under logs, in between deck floor joists, inside chimneys, behind siding or around the tops of window and door frames.

Female paper wasps are also notorious for ending up inside homes. They enter through small crevices near the roofline when searching for potential overwintering spots. Once inside, paper wasps often hide in wall voids or inside warm attics. There, they enter a state of diapause, suspending their development throughout the coldest months. This means that homeowners most likely won’t see them until spring – unless there’s an unusual period of warmer weather, during which time the wasps become active again and look for an escape route leading back outside to start a new nest. At that point, the wasps may make their way into the main living areas of the home, where they are seen by the people who are living inside. 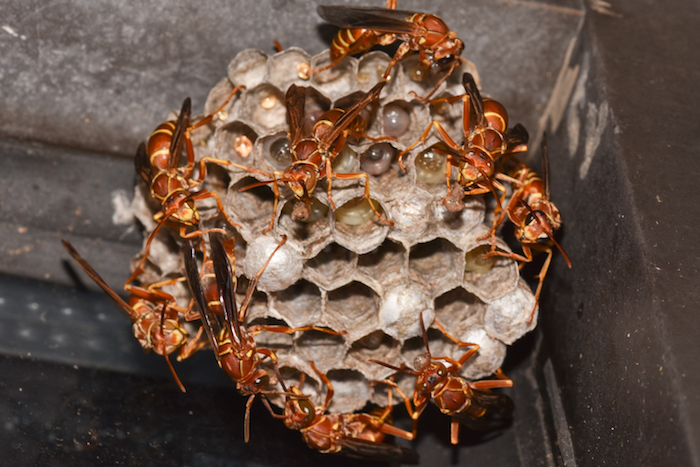 The good thing for those who encounter a paper wasp inside the home during the winter months is that the pests are usually sluggish and can be easily removed. However, if a large population is discovered, it’s best to contact a licensed pest control professional for safe removal. While not an aggressive species by nature, paper wasps will sting if they are disturbed or feel threatened. Wasp stings are painful and may result in an allergic reaction for those sensitive to insect stings.

The key to keeping paper wasps from moving indoors – not just over the winter but throughout the year – is to identify and seal all openings that lead to the outside of the home. The National Pest Management Association (NPMA) recommends using a silicone-based caulk, steel wool, or a combination of both to fill cracks and larger holes in the home’s foundation. Homeowners should pay special attention to porch ceilings, around roof eaves, soffits, attic rafters, windows and doorframes, as these are places where paper wasps congregate. It’s also a good idea to work with a licensed pest control professional to conduct an outside preventive treatment before the cool weather rolls in.

Previous
What Does a Tick Look Like: Tick Species and the Threats they Pose
Next
When bed bugs strike, it can drive rational people to act in a very irrational manner.

The Difference Between Paper Wasps and European Hornet

Got it!
X Get Bar